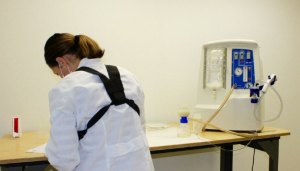 The M-Vac is a wet vacuum system originally developed for use in the food industry to sample food  for possible pathogens.  However, the developers of the system realized that with some minor tweaking this system could also be a huge benefit in the collection of forensic DNA evidence.

The M-Vac can be thought of as a miniature hand-held carpet cleaner.  However, instead of spraying a cleaning solution, the sampling head sprays nuclease-free, DNA-free, sterile buffer onto the item of interest.  As the buffer is sprayed, DNA present on the surface of the item is released from the substrate and is vacuumed up by the constant vacuum that is simultaneously applied by the sterile, single-use sampling head.

Once the item is sampled, the liquid, which will contain DNA from the substrate and is captured in a collection bottle, is transferred to a sterile Nalgene 0.45micron filter and allowed to filter through under vacuum pressure. The 0.45micron filter allows the water to filter through while capturing the DNA on surface of the filter.  Once dried, the filter can easily be removed from the Nalgene filter apparatus and can be further processed for DNA using the same techniques as cuttings or swab samples.

Who is using it?

This method is gaining momentum and public forensic laboratories, police agencies, as well as a handful of private labs in the US and other countries are currently utilizing the M-Vac system on some of their most difficult cases containing extremely low amounts of DNA.  Ryan Forensic’s Advanced Serology Lab is one of the private laboratories which have the capability to collect DNA using the M-Vac system.

You may be asking yourself, why should you consider using this admittedly more expensive collection method over traditional swabbing, taping, or cutting techniques?  Some of the reasons  for using the M-Vac are:

Has it been used on actual casework evidence?
The discussion above may lead some to wonder if the M-Vac has been successfully used on actual casework samples, and if so, have any of these cases been through the court system? The answer to both questions is a resounding, “yes!”.  Success stories can be found on M-Vac’s website (www.m-vac.com) and involve homicides, sexual assaults,and cold cases.  The murder of Uta von Schwedler, a University of Utah researcher, was solved in part due to the DNA results that were able to be obtained from a pillowcase though to be associated with the crime. The main suspect in the case was the victim’s ex-husband, John Brickman Wall, a pediatrician.  Although a partial Y-STR profile was developed from the pillow, the suspect’s son also lived in Ms. von Schwedler’s home and, considering that the Y chromosome is passed unchanged from father to son, could have left the DNA behind.  M-Vac testing was able to collect more DNA from the pillow and DNA testing was able to place an autosomal DNA profile consistent with the defendant on the pillow. The presence of this profile was more difficult to explain considering that Wall had not lived in the home for some time prior to Ms. von Schwedler’s murder and this evidence, along with other physical and circumstantial evidence was used to convict Mr. Wall of the murder of his ex-wife.

A second case, involving a 17-year-old cold case will be heading to trial in the very near future.  The M-Vac was critical to the success of solving the case as the victim, Krystal Lynn Beslanowitch had been bludgeoned to death with a rock and the M-Vac was able to collect a full DNA profile matching the suspect from the rock.

What about validation?  Should I be worried about contamination?

As the owner of a private laboratory that utilizes the M-Vac system, some police agencies have expressed concern to me that their laboratory may not accept the M-Vac collected sample since the system has not been validated by their state or county laboratory.  However, as a former FBI-trained DNA laboratory auditor, it is my opinion that this should not be an issue for the lab as the M-Vac has undergone developmental validations to confirm that the reagents and consumables used are completely sterile and free of any nucleases or DNA.   Beyond that, the M-Vac system is simply a DNA collection method.   The samples produced are no different, in terms of extraction methodology, than any other collection method.  Instead of a swab or swabs, the lab would simply be presented with a piece of polyethersulfone (PES) filter paper about the size of a half dollar.  The filter can easily be cut into smaller pieces and placed in a standard 1.5ml tube for extraction purposes.  The filter paper is amenable to nearly all types of standard manual or robotic extraction methods, with the sole exception of the organic extraction method which does not work well with the PES filter.  The point is, however, that the lab does not have to do anything different when processing an M-Vac filter than when processing a cutting or a swabbing. If the lab is concerned about this type of sample, they could also refer to various other forensic laboratories who are using the M-Vac in their lab and have performed internal validations illustrating great success with the M-Vac.  Those validations are available online and  may at some point be published in a peer-reviewed journal.

Laboratories do not validate each type of new or different swab (of which there are many brands and types of swabs in use today) used by the many different agencies that submit DNA evidence to them, so there should be no expectation that a filter received by the lab for processing must first undergo a validation procedure prior to commencing with extraction of the sample.

Further, assuming proper operator precautions are taken, contamination is not an issue with the use of the M-Vac since the buffer, tubing, sampling head, and filter apparatus are completely sterile.

What kind of results will I get?

A concern that has been expressed in the past is that the M-Vac might collect “too much” DNA.  Although I must admit I am not completely sure what “too much” DNA might be, I can understand a fear that the M-Vac might pick up extra DNA to the point that an uninterpretable mixture might be obtained.   While that is certainly a possibility, just as it is with the swabbing technique, it is also now possible to interpret complex mixtures with the aid of probabilistic genotyping software. In addition, internal validations from various agencies have actually shown that in some instances the M-Vac  can lead to higher-level mixtures that are interpretable versus low-level, uninterpretable, mixtures obtained with traditional methods.

The M-Vac is a fantastic new tool in the forensic arsenal and the more laboratories, police departments, and crime scene investigators that make use of this tool, the more the most challenging cases will be solved.  The M-Vac is not right for every case, but it might just be the answer you are looking for with cases involving rough and porous items, items that are too large for swabbing, or items that have previously been tested.

To see the original article on LinkedIn click here and the author, Suzanna Ryan.

By mvacjb2014 in Uncategorized on April 13, 2016.
← Victims and Investigators Deserve This Technology Cold Case Flipboard Posting By Defrosting Cold Cases →